It can be found that the land around the farm has been farmed and lived on possibly since 1066AD.

There is remains of a medieval village just across the valley (visible from our large field), there is a visible burial mound in a field next to our dog exercise field and the stream/brook leads to a medieval water meadow dating 1540 to 1901.

The main farm house at Kipscombe was built around early 1800, built from stone and mud and tile hung with slate tiles. The timber would have been oak and the ground floors had flag stones. Sadly the house was left derelict for a while and then completely rebuilt to a much bigger property as you see now. The only original stone walls are part of the rear south wall and an internal stone wall, which was the then north wall which has been reduced to a single story internal wall. Only 1 flag stone remains and all oak timbers have gone.

The remains of Kipscombe deserted medieval village are visible on a promontory west of Wallover Wood, Bratton Fleming. They comprise a series of well preserved earthworks and banks including the remains of three long houses. Further down the slope to the north the remains of two lynchets are visible as earthworks on aerial photographs. The settlement is smaller than that at North Thorne in Bratton Fleming but the two are probably contemporary. (taken from the "Devon & Dartmoor Historic Environment Record”

The remains are visible from the field called the Slom at Kipscombe. Go to the south east corner at look south over the valley, you can just work out the village location.

Access: The remains of the medieval can be easily accessed as a bridle way passes right by. When you arrive at the Kipscombe deserted medieval village you can see why that location was chosen. High up with access to fresh water via the spring fed stream at the base of the valley.

Parking: you can park in various places along the lane. Then follow the bridlepath from Northland Corner. You'll pass through a couple of wooden gates. 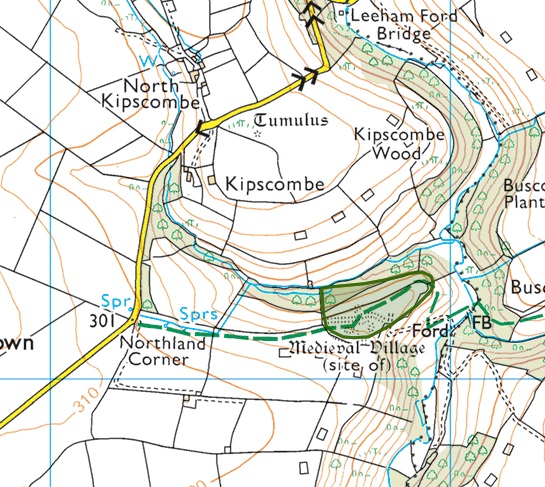 A Scheduled Monument in Bratton Fleming. Known as a Tumulus (bowl barrow, as shown on a map). It is visible from Kipscombe's field called the Slom. located to the north just over the Devon bank. It is easier to see in winter months when the hedging has shed their leaves.

Bowl barrows, the most numerous form of round barrow, are funerary monuments dating from the Late Neolithic period to the Late Bronze Age, with most examples belonging to the period 2400-1500 BC. They were constructed as earthen or rubble mounds, sometimes ditched, which covered single or multiple burials. They occur either in isolation or grouped as cemeteries and often acted as a focus for burials in later periods.

This monument includes a bowl barrow situated on a high upland ridge which marks the watershed of two tributaries to the River Bray. The monument survives as a circular mound which measures 9.8m in diameter and is 0.9m high. The surrounding ditch from which material to construct the mound was derived is visible on all sides of the barrow and measures up to 2.9m wide and 0.1m deep. An excavation trench measuring 2m wide and extending from the top of the mound towards the south west is just visible. As a result the mound generally slopes on the top in a south westerly direction.

Despite reduction of the Tumulus height through cultivation and disturbance through partial excavation, Kipscombe bowl barrow survives well and will contain archaeological and environmental information relating to the monument and its surrounding landscape.Information provided by a www.ancientmonuments.uk/114868-kipscombe-bowl-barrow-bratton-fleming#.W_6T2Yv7Tcd

Access: There is no access for the public as it is on private land but is visible for our guests at Kipscombe.

Loading...
Upps!
You're running a web browser we don't fully support. Please upgrade it for a better experience.
Our site works best with Google Chrome.
How to upgrade the browser